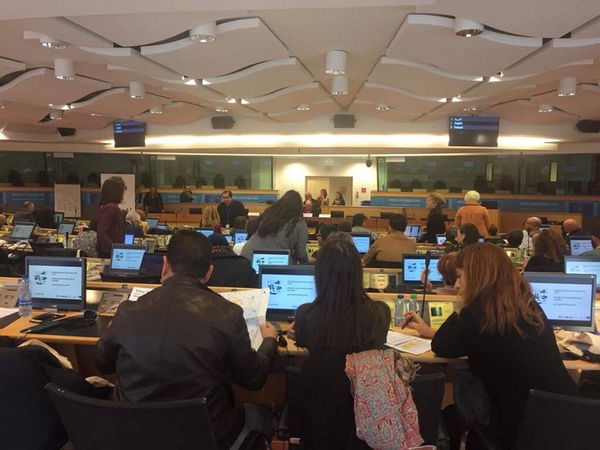 Representatives from over 150 civil society organizations, the majority of which coming from the South of the Mediterranean region, met in Brussels on November 20 and 21 for this first Brussels Civil Society Forum in order to debate four regional themes: Good Governance; Security and Countering Violence; Migration; Economic Development and Social Dialogue.

As a reminder, initially known as the Southern Neighborhood Civil Society Forum, this process of conducting structural dialogues between the European Union (EU) and civil society in the southern Mediterranean started in Brussels in 2014. For four years, the EU organized this dialogue. But the 2018 edition marks a change in perspective as it is the first year that the Forum is organized by civil society itself through the Majalat initiative. Civil society actors are now in the driving seat of organizing and framing the dialogue with the EU.

This first Brussels Civil Society  in Brussels follows a "Southern" political seminar and youth workshop held in Amman in September 2018 and has made a vital contribution to the preparation of this Forum.

During two days of intensive exchanges, the four priority themes were discussed with experts and high-level EU representatives, including the Commissioner for European Neighborhood Policy and Enlargement Negotiations Johannes Hahn (* ). The exchanges highlighted the concerns and identified possible solutions for each theme. They also emphasized the need to promote a cross-cutting approach to human rights, a specific focus on the inclusiveness of marginalized groups, youth participation in the process and the gender dimension.

In conclusion, a panel discussion was held on the future of the Majalat project and the regional dialogue.. The panel was composed of Michael Koehler (Director for Neighbourhood South, DG NEAR), Colin Scicluna (Director for the Middle East and North Africa, EEAS) and Ibrahim Kassou (President, FMAS), with Giovanna Tanzarella (Vice-President, REF) chairing. This was followed by some closing words from Ziad Abdel Samad (Executive Director, ANND).

The years 2019 and 2020 will include a full cycle of activities with thematic workshops, national workshops and a youth workshop, leading to the 2019 South Seminar and Brussels Civil Society Forum.

(*) Speech of the Commissioner for European Neighborhood Policy and Enlargement Negotiations, Johannes Hahn.