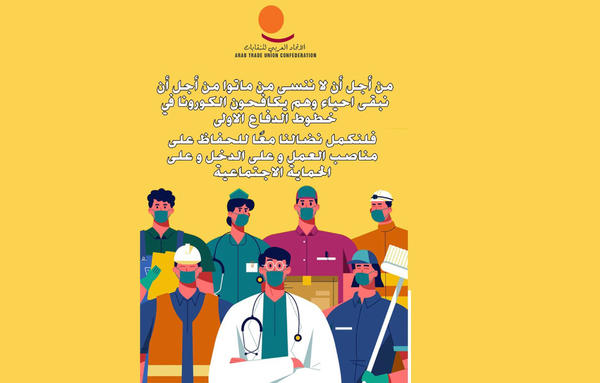 In the southern Mediterranean region, as in the rest of the world, for the first time in 130 years, unions and workers were unable to demonstrate in the streets during Labor Day. Due to protective health measures taken in light of the coronavirus pandemic, unions expressed their demands via social networks intsead.

Unions in the region, that are affiliated with the Arab Trade Union Confederation (ATUC), aligned together in their May Day statements, paying tribute to health care workers and other frontline workers.

In the Southern Mediterranean region and around the world, it is the poor and poorly paid workers who are paying the heaviest price for the consequences of the necessary health measures, especially women and migrant workers. Unions in the region have relayed the message of the International Trade Union Confederation (ITUC) and demanded that the revival of the economy be aligned with three objectives: decent jobs, guaranteed minimum incomes and social protection for all. They condemned the predatory companies seeking to take profit from this crisis and recalled the importance of massive investments in healthcare and public health services accessible to all.

Trade unions also stressed the importance of solidarity, the flagship value of trade unionism, as well as social dialogue and respect for human rights in order to face this crisis and prepare for the future.

In Palestine, the General Federation of Palestinian Trade Unions (PGFTU) called on all workers to respect preventive measures when returning to work. The Federation recalled that Palestinian workers continue to be trafficked and exploited in the Israeli labor market. It also renewed its calls for fair and equitable compensation to all those who have been penalized by the spread of the pandemic.

In Jordan, the General Federation of Jordanian Trade Unions (GFJTU) warned of the impact of the pandemic and called for every effort to be made so that Jordan can achieve its Sustainable Development Goals.

In Egypt, the Democratic Labor Congress of Egypt (EDLC) has expressed concern about the impact of the pandemic on workers in fragile sectors and called for the provision of effective prevention tools to all workers. The Egyptian Center for Trade Unions and Workers Services (CTUWS) also spoke on the occasion of World Virtual Workers Day (#VirtualMayDay), stressing the importance of strengthening solidarity among workers under the current difficult circumstances.

In Tunisia, the Tunisian General Labor Union (UGTT) called on the government to suspend the wage levies and the exceptional contributions of the workers, explaining that the workers have already made all the sacrifices to help the country face the crisis of the pandemic.The secretary-general, Noureddine Taboubi, said he was worried about the damage caused by the cessation of economic activities in small trades and crafts. Taboubi also welcomed the decision to counter arbitrary imports which served the interests of domestic production.

In Libya, despite the context of armed conflict, members of the General Federation of Libyan Workers (LGFTU) who work in ports have activated the sirens of boats to celebrate Labor Day and call for solidarity.

In Morocco, the Moroccan Labor Union (UMT) called on the authorities to impose respect for freedom of association on all companies in order to combat any form of exploitation of the current crisis. UMT also reminded employers that they must strictly follow safety and prevention rules. The General Union of Workers of Morocco (UGTM) called for the momentum of national solidarity to be maintained so that the country can overcome the crisis of COVID-19 and paid tribute to the health and frontline security workers who are fighting the pandemic. The Democratic Labor Confederation (CDT) stressed that the priority today is for the institutionalization of social dialogue in order to finally break with violations of workers’ rights. The CDT also called for taking the social aspect into account when formulating the country’s general policies.

Call for contribution! Take part in the dialogue process regarding the impact of the Covid-19 crisis

In Morocco, Under Pressure From Civil Society, the “liberticide” Bill Concerning Social Networks is Backtracking